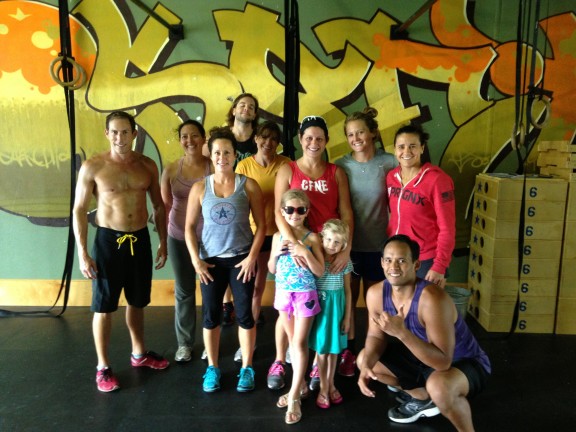 Sara C and Mary at Crossfit AllStar in Waimea, Hawaii. No vacation would be complete without a trip to a local box. Looks awesome! We’re all a bit jealous…just a bit…maybe more than bit…a tad.

Record your times for each round and post fastest and slowest times to comments. 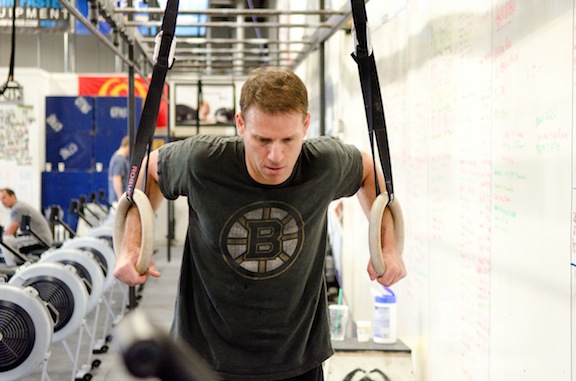 Firebreather of the Month: Mike Braatz

Congratulations to Mike Braatz, our Firebreather of the Month for July! Braatz is a member of the diehard 5:30am Mayhemers and was kind enough to answer some questions about Crossfit, his underwear preference, and the Spice Girls. So here’s the skinny:

1. How did you get involved in crossfit?
I give credit to CFNE member Andy Renzella.  I went to a Little League coaches meeting a couple of years ago, was scanning the crowd for people I knew and looked right past this guy.  He gave me a funny look, and said “Hi Mike”.  I recognized the voice, but it took me a few seconds to place it… holy crap, Andy!?!?  We had known each other for a while, but I hadn’t seen him in probably 9 months. I didn’t recognize him at first – he had lost a ton of weight and looked like he belonged on the cover of a fitness magazine. He told me about his CrossFit experience.  It was inspiring, and now, a year and half after taking a private Elements class with Ashley, here I am.  And, I might add, Andy’s still here at CFNE too, crushing it as always.

2. What is your favorite movement?
Squat snatch. No question. I know it’s not a widely held favorite, but for some reason it just gets me.

3. What is your favorite WOD?
Murph.  It’s always a great day at CFNE. Huge classes, big energy in the gym, and members and Coaches – especially Geoff Leard – who treat it with respect and make it memorable.  Honorable mention goes to “Muffins and Sweatpants”.  For the name alone, of course, but also because it involves sets of 21 snatches.  I still don’t know the story behind the name, but it’s genius.  Does being named Firebreather of the Month get me the inside scoop on the story?

4. If you were stuck in a Sharknado how would you escape?
Seriously, did the movie teach us nothing? Two words: jet, chainsaw.

6. Favorite cheat meal?
A dozen Dunkin Donuts, chocolate frosted. Wait… what? That’s not a meal? OK, then… the burger at Sel de la Terre. It comes with rosemary fries, which I like as much as I hate ring dips.

7. If you could be any member of The Beatles who would you be?
Paul. Maybe it’s the easy answer, but he’s rich, he’s talented and he’s still doing what he loves. And it helps that he’s still alive.

8. Boxers or briefs?
I subscribe to Cosmo Kramer’s position on underwear: my boys need a home. Boxer briefs are a good solution.

9. If you could be any Spice Girl who would you be?
I’m a HUGE Spice Girls fan, so this is a really hard question. But since this is a CrossFit article, I’m going with Sporty Spice. I call her Mel C., though. Did you know she’s actually very sporty, and can do back handsprings?!?! Beast.

10. It’s the zombie apocalypse what do you have in your backpack?
I don’t know much about zombies, other than that they’re the new vampires. But I’m going with my iPhone, a water bottle and a chainsaw. I Googled “how to kill a zombie”, and “chop off their head with a chainsaw” made the top ten list. And since I’ll need one for sharknado, too, I’m all set.

11. Who would win in a fight, Spiderman or Batman? Also is Batman really a superhero?
I’m very movie oriented, so I think of this as Christian Bale vs. Tobey Maguire. Christian Bale is intense and probably a little crazy, so he’ll fight dirty. I think he wins in a fight. But props to Tobey for his Tropic Thunder cameo. Batman is a pretty normal guy who gets in great shape, has good helpers and cool gear. Wait… just like a CrossFitter! So he IS a superhero.

12. How much wood could a woodchuck chuck if a woodchuck could chuck wood? Just kidding! Seriously though, what’s your favorite outdoor activity when you’re not crushing WODs at the crack of dawn?
I’m very happy that both of my kids have found team sports they love – soccer, basketball, baseball and football.  It keeps them active, it’s social and teaches them how to win and lose.  I really enjoy practicing with them, coaching and just watching them compete.  And we also spend a lot of time up at Lake Winnipesaukee, hiking, swimming and skiing.

There you have it folks! 12 questions with Mike Braatz, our Firebreather of the Month. 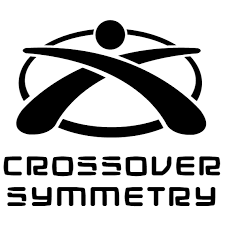